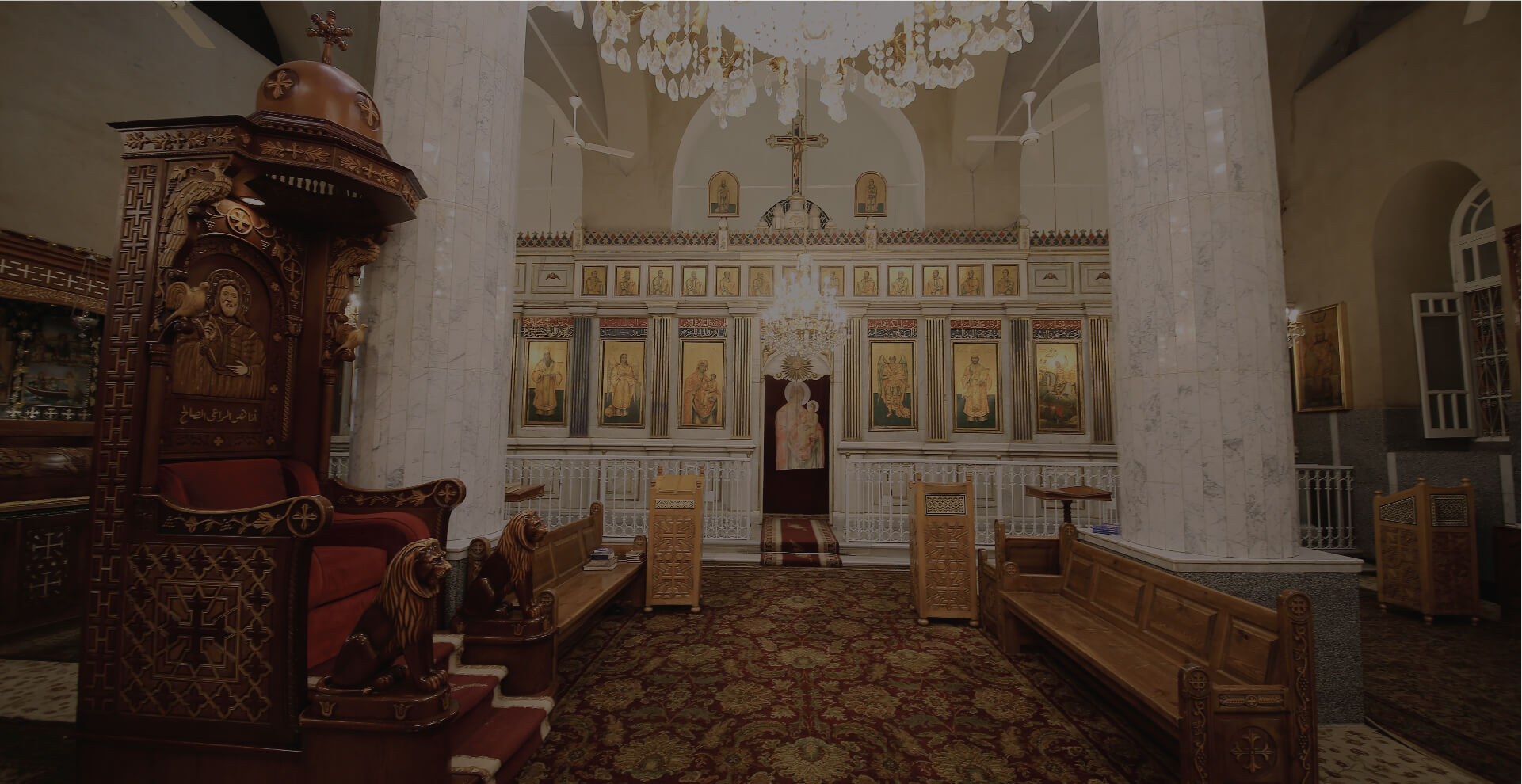 This church is the oldest in the monastery and is unique in its simple structure, taking into consideration the maintenance, repairs and modifications that have been made through the history of the church. It cannot be categorized under the geometrical style of the architectural art of any Coptic churches. In other words, it is distinguished by its simple and unsophisticated – not factitious – architectural structure. It is built of sun – dried brick. Its walls are unsymmetrical and unsystematic. There are no ornamental ancient Coptic patterns, engravings, dappling, variegations or drawings on its walls…etc.It is known that ancient architecture, especially the Coptic’s of ancient churches, has its own architectural identical rules that can identify the time of building through its style and inner divisions. Yet the simple structure of this church – unlike ancient churches in general – made it difficult to set or identify an architectural style that can lead to the artistic value of the building.The uniqueness of the impossibility of applying correctly the architectural rules on this modest

building of the church is a great witness to its antiquity and originality. Despite the maintenance carried out to the church, there has always been obviously steadfast convention, and an effective spirit of those who lived in the place through different ages to keep it simple even if they had to repair it. Although they could have built a cathedral instead, to be honorific and fit for the status and prestige of the place, which the Holy Family blessed during their visit and stay, they chose not to.The following is a detailed explanation of the church:

God Father’s Bosom is a curved semicircular area in the eastern wall of the “sanctuary”; a symbol for God’s longing for His church, which is waiting for His coming.Two other rooms were also built on both sides of the sanctuary. They are obviously far simpler than any architectural art; yet they are featured with the church’s ancient original ritual. The left (Northern) room is used as a Sacristy; a dressing room for the clergymen, and had no door to the nave of the church. The right(Southern) room is for the deacons’ service, where the “Holy Communion set” is kept. It also had a hole in the floor, at the bottom of its eastern wall, for emptying the thurible (censer) at the end of the liturgy service.According to church ritual, four pillars must be erected around the altar, as they symbolize the four Evangelists. However, due to narrow spacing of this sanctuary, three pillars were erected and fixed to the right and left walls. The forth pillar were added later during the same restoration mentioned above.

Three domes were later built, in the 16th century, over the sanctuary and the two rooms, on each side.Entries to the sanctuary are all low-rise, which makes the believer passing through it, his head bowed in humility and respect for the house of the Lord.

Is the most important content in the sanctuary; is cubic in shape and not equilateral. On its surface there is a marble slab with a semicircular edge where Greek inscription engraved, (Dating back to the 8th century).According to the Coptic Church tradition, ‘the altar’ of TheHoly Virgin Mary Church is located “in the midst of the land ofEgypt”; this was to fulfill what the Lord has spoken by the prophet, saying:“In that day there will be an altar to the LORD in the midst of the land of Egypt, and a pillar to the LORD at its border.” (Isaiah 19:19).

Nothing remained of the ancient nave except for the southern wall, extending from the first to the second sections. The other walls; the southern wall of the third section, as well as the western and the northern walls, were all constructed in the 19th century. According to Coptic tradition, the nave is divided into three main sections. The first section is for the believers, the second for the penitents and the third for the catechumens (people who are not baptized in the faith). Seven domes were also built over the nave, carried by squinches on top of four circular pillars, made of red and black bricks. The external narthex built with two pillars in the middle and roofed with wood. Finally the Ethiopian church was built on top. However, in the thirties of the 20th century this church was removed because it was feared that it may affect the building of the ancient church. According to information collected, the church has never been damaged, but repairs were carried out occasionally, due to the nature of the building construction which was made of sun-dried bricks.

There are two iconostasis placed in the church:The first iconostasis is placed to the west of the altar, thus separating the sanctuary from the nave. It dates back to the 16th /17th century. It is composed of small geometrically shaped pieces of wood that are carefully (dovetailed) in a way of repeated units to form engraved and inlaid ivory crosses. In the four angles of each cross there are ivory inlaid fish-shaped figures. Those four fish, in their first stage of life, symbolize the four gospels in their early spreading, concentrating and focusing on the cross of Jesus Christ, being both, a centre and an original source of a believer’s life and a sign of the second coming of the Christ .“Then the sign of the Son of Man will appear in heaven…”(Matthew 24:30).“But God forbid that I should boast except in the cross of our Lord Jesus Christ…”(Gal 6:14).

Here lays the strong Biblically foundational curriculum of the Church, focusing on Coptic art and the relation with the liturgical rituals. Symbols were used in the early church as it offers a deep spiritual meaning.The Iconostasis which forms both a complete visual and a physical barrier, along with beautiful icons and crosses carved on the wood facing the congregation, is an open book written in an easy and simple language, announcing to all generations God’s love for humans.On the arch of the sanctuary’s main door, is a Coptic – Arabic phrase engraved, in pure silver, on a wooden plaque, reads as follows:“Hail to the sanctuary of God, Hail to St. Mary Mother of God”.Apparently, the arch of this part of the door is made of wood that is older than the rest of the iconostasis, carved on its back, some anonymous inscriptions. In the center of the arch, is a metal ring to hang the thurible during the liturgy service.It is known that the sanctuary is highly sacred, and is not permissible for laymen to participate in the service within it. Hence, there is a small window on each side of the main door, for the congregation to receive Holy Communion; this is now being practiced in the nave of the church, in front of the main door.In the forties of the 20th century, the iconostasis was de-assembled as it has been affected by termites (white ant); the damaged pieces were removed. This restoration resulted in the shrinking to the overall size of the iconostasis.

removed from the Ethiopian church and is adjacent to the first iconostasis. On the arch of its door, is a Coptic–Arabic phrase engraved, in pure silver, on a wooden plaque, dating back to the 19th century, reads as follows:“Glory to God in the highest, and on earth peace, good will toward men”“Hail to the sanctuary of God the Father”.“A sanctuary dedicated to the name of Peter and Paul the apostles”.

In the Orthodox Church, the icon is a highly stylized religious painting. The subject and placement of the icons is significant as an illiterate person could learn the whole gospel just by looking around.Living in flesh, the physical senses are in need for tangible or foreseeable to assist the heart in meditating on the unseen. Icons are therefore means for prayer.That’s why each environment has its own art, which depicts and expresses the feelings, pain and hopes of its people. Likewise, the Coptic art is not only a religious art – as thought by some – butrather it is an authentic popular art that express sincere feelings of the people.It stems from them for their service; from an environment in which the iconographer lived and who is 13

subject to the traditions he inherited from his fathers and grandfathers. He might added something of his own, yet, he did not violate the culture of the environment and everything that he saw and was passed down to him.It is a wonder that in spite of terrible periods of persecution that the Coptic Church went through, No icon or carving exists that depicts the pain and sufferings of the saints. Neither does it reflect the place of torments, or agony of sinners.It expresses joyful life filled with victorious spirit and power of soul prevailing of innocence, love, kindness and purity of thought.Hence, icons are fixed to the iconostasis in order to attract the soul to long for the eternal glory.

I. The Queen Virgin St. Mary. II. One of the two Baptism icons. III. One of the twelve disciples icons. IV. Icon of two monastery abbots: Fr. Hegomen Abd El-Malak El-Assiuty (1772- 1808 A.D.) (Right),Fr. Hegomen Girgis El-Dwairy (1808-1813 A.D.) (Left).The Monastery Fathers (19th century) fixed this icon on the Iconostasis, due to their sincere love. During that time, it was well-known to everyone, the faith and the holiness of these abbots.

Icon of Our Lady [the villager] :Mounted on the northern wall of the second section. The Virgin Mary appears with her beloved Son, in her simple village clothes. Beneath are in order from right to left; St. Anthony, St. Marqorius Abu – Seifin, St. George and St.Paul.

While the church is considered a symbol of Heaven, the oil lamps and candles stand as a symbol of stars; for if the material sky is decorated with lights-stars, rather than should the spiritual Heaven also be decorated. The only remaining oil lamb in the church, is that of the God Father’s Bosom at the eastern wall of the sanctuary. The east lamp also symbolizes the star which appeared to the wisemen at the Levant.

In the church symbolize the divine providence and resurrection of the Lord.